Hey everyone! Sorry I've been absent the last couple of weeks. I've had a lot going on, and my blog just totally fell off my radar. I need to take some time off, probably for the rest of the summer. I'll still be resisting in my local area, and I hope you will, too.

In the meantime, please visit the following websites for more daily and weekly actions you can take to resist 45:
For this week, please see my last post for information on how you can help stop the Senate bill to repeal the ACA. We won a battle by getting the vote postponed, but the war's not over. It's very important that we keep up the fight to protect our healthcare until the bill is officially dead:
http://www.thenightowlactivist.com/2017/06/weekly-actions-for-week-of-june-19th.html

Also, on July 15th, in cities across the country, Refuse Fascism is holding events to protest the 45 administration. The one here in Philly is actually pretty late in the day, so I plan to stop by. Learn more and find an event near you here:
https://refusefascism.org/2017/06/09/july-15-2017-in-cities-across-the-country-demonstrate/

I hope to get back to posting weekly in September. Keep up The Resistance! 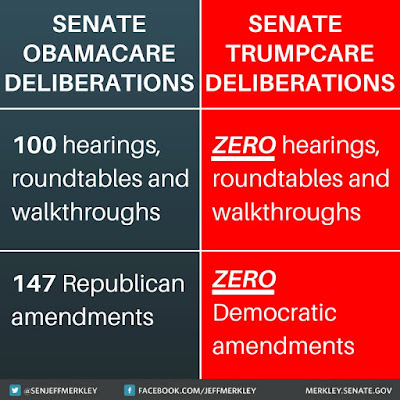 RED ALERT - SAVE OUR HEALTHCARE!

As I type this, Senate Democrats are holding the floor in an attempt to stop the Republican healthcare bill (also known as "Trumpcare"). 13 Republican senators are working on this bill in secret, and they're planning to try to pass it without any public hearings, committee reviews, or amendments. Senate Democrats have pledged to withhold consent on any Senate requests except for honorary resolutions.

This week, I have only one action for you: Get on the phone. Call your senators' offices every day. If you can't get through, call again, or use the Stance app to automatically send a voicemail when call volume is low. You can also use Resistbot or FaxZero to send a free fax.

Use the scripts below from Indivisible, and make sure you share your personal story of why the Affordable Care Act and/or Medicaid are important to you.

Posted by Jen Heller Meservey at 3:09 AM No comments:

What's going on: So, last week, I said it was looking like the GOP's healthcare bill might be dead in the water. Well, this week, that's all out the window. Senate Majority Leader Mitch McConnell has suddenly started pressuring Republican senators to come up with a new healthcare bill by the end of June so that they can vote on it before the July 4th recess. Not only that, but they're trying to get this bill passed without any hearings, committee markups, or amendments, and without sharing it with the public. They want to take away our healthcare behind closed doors before we even know what hit us. We can't let that happen.

All hands on deck! This is not a drill! Word on the virtual street is that members of Congress (MoC) have reported quiet phone lines lately. We can't let that happen either! It's time to get on the phones, send emails and faxes, visit our senators, attend their events, camp out outside their offices, whatever we have to do to stop this bill from being passed. If it's anything like the AHCA (which it most likely will be), it will cause at least 23 million Americans to lose their health insurance, and that's just the tip of the iceberg.

What you can do: Use the following links to get informed, contact your senators, and tell them to leave the Affordable Care Act (ACA) alone. Check out My Favorite Tools for the Resistance for easy ways to find information and send voicemails, faxes and emails.

What's going on: The big news last week was former FBI Director James Comey's testimony before the Senate Intelligence Committee, where he stated that 45 told him to make the Russian investigation go away. A former Watergate prosecutor said that this is sufficient evidence for an obstruction of justice case against 45. Tomorrow, Attorney General Jeff Sessions will testify in a public hearing. Rumors are going around that 45 plans to fire Robert Mueller, who was recently appointed as special counsel in the investigation.

Yesterday, the attorneys general of D.C. and Maryland filed a lawsuit against 45 for violating the emoluments clauses of the Constitution by accepting payments and benefits from foreign governments. All of this, along with the distinct possibility that 45 colluded with Russia to interfere in the 2016 presidential election, may be sufficient cause for impeachment charges. Yeah, that's right. It's time to start calling for impeachment (unless you're like me and you've been calling for it from day one).

What you can do: Use the following links to contact your MoC and demand that they hold 45 accountable.

What's going on: FCC Chairman Ajit Pai has a plan to kill net neutrality by allowing Internet service providers to block web pages, slow down their competitors' Internet traffic, and create online fast lanes by charging tech giants for faster delivery of music, movies, TV shows, and other streaming content. The FCC is currently accepting public comments on the plan.

What you can do:
Posted by Jen Heller Meservey at 3:12 AM No comments:

What's going on: Last week, 45 pulled the U.S. from the Paris Climate Agreement, an agreement between several countries to take efforts to combat climate change. Since then, many U.S. mayors, governors, and attorney generals have announced that they will continue to support the efforts of the agreement despite 45's decision.

What you can do:

What's going on: On Saturday, thousands of Americans in over 130 cities joined the March for Truth to demand an independent investigation into 45's ties to Russia and Russian interference in the 2016 presidential election. Today, a top-secret NSA report revealed that Russian military intelligence executed a cyberattack on at least one U.S. voting software supplier last year, sending spear-phishing emails to more than 100 local election officials just days before the election.

What you can do:
Healthcare

What's going on: Last week, Republican Senator Richard Burr said in an interview that it's "unlikely" that the Senate will come up with a healthcare plan this year. Senate Majority Leader Mitch McMconnel stated that he doesn't know how the Senate would be able to get the 51 votes required to pass a healthcare bill. Today, leaked information revealed a 45 administration plan that would allow employers to remove birth control coverage from insurance plans.

What you can do:
Posted by Jen Heller Meservey at 3:39 AM No comments:

I hope everyone had a nice break for Memorial Day. I had a couple of subscriber requests last week, but I won't be able to include them in this week's blog post because there's just too much to cover. So, if you sent me an action, I apologize. I'll try to post it next week.

Breaking News: In case you missed it, 45's latest Tweet is even more nonsensical than usual...

The Internet is clamoring to uncover the meaning of this mystery word, "covfefe." If you haven't yet, look up the #covfefe hashtag on Twitter. It's highly entertaining.

And now back to our regularly scheduled blogging...

This week, members of Congress (MoC) are back in their home states on recess. This is the perfect time to pay a visit to their local offices or attend a town hall. Here are some resources for finding town halls and other events in your area and talking points for when you meet with your MoC.

What's going on: Rumors have been floating around that this recess is a test for the American Healthcare Act (AHCA), the GOP's plan to repeal and "replace" the Affordable Care Act (ACA), which was recently passed in the House. The Congressional Budget Office estimates that the AHCA would leave 23 million Americans without health insurance. A commission of Republican senators has been formed to write their own version of the bill, which is likely to be just as bad as the House bill.

What's going on: 45's budget plan was released last week, and here are just a few of the programs it would make cuts to:
It would also increase spending on defense and border patrol while giving tax cuts to the wealthy. Needless to say, this budget is designed to benefit the rich and leave everyone else out in the cold. Even some Republicans have stated that the budget goes too far.

What you can do:
Posted by Jen Heller Meservey at 4:05 AM No comments:

Hi everyone! I know it's been a while, but I'm back... for now. Things have been crazy for me over the last month or so. You may have noticed that the title of tonight's blog post says "Weekly Actions" instead of "Nightly Actions." Well, I think I need to give myself a break and just post one blog per week from now on. I'll post again during the week if something big happens (as it often does with this administration). I have a lot going on, and this will free up my time to focus on local actions.

If you're not a member of a local Resistance group, I encourage you to find one near you at one of the following websites. It's great to meet up with fellow resisters and plan actions you can take together. You can also work on issues on the local level in your state or town.

What's going on: Last week, Deputy U.S. Attorney General Rod Rosenstein appointed former FBI Director Bob Mueller to be a special counsel overseeing the investigation into Russian interference in the 2016 presidential election. If you were one of the many people who contacted your members of Congress to demand a special counsel, give yourself a pat on the back! You helped make this happen! Now we need to make sure that an independent commission is formed to complete a fair, impartial investigation.

What you can do:
Net Neutrality

What's going on: Last week, the FCC voted to begin undoing net neutrality rules that were put in place two years ago. The vote kicked off a public commenting period that will last for several months, during which companies, interest groups, and advocates can file their thoughts with the FCC.

What you can do:
Voter Suppression

What's going on: Recently 45 established a "commission on election integrity" to investigate his bogus claim that millions of fraudulent votes were cast by noncitizens in the 2016 presidential election. The co-chair of this committee, Kansas Secretary of State Kris Kobach, is notorious for his voter suppression efforts in Kansas. Research has found very few incidents of suspected noncitizen voting during the 2016 election (only about 0.0001%).

What you can do:
LGBTQ+ Issues

What's going on: So-called "conversion therapy" claims to change a person’s sexual orientation or gender identity on the premise that being LGBTQ is a curable mental illness. This fraudulent practice tortures LGBTQ youth and has been repeatedly discredited and condemned by medical professionals. A bill called the Therapeutic Fraud Prevention Act would clarify conversion therapy as a deceptive practice with enforceable penalties under the law.

What you can do:
Education

What's going on: A copy of the White House's preliminary budget proposal has been released, and it contains a $9.2 billion cut to the Department of Education. $400 million will be spent to expand charter schools and private and religious school vouchers (supported by Secretary of Education Betsy DeVos), and $1 billion will be set aside to steer public schools toward so-called "school choice" programs.

What you can do:
Posted by Jen Heller Meservey at 4:50 AM No comments:

My Favorite Tools for The Resistance

I thought I'd just pop in to quickly share with you all my current favorite tools for The Resistance. Please share them with your friends and family to get everybody engaged in contacting their legislators.